Recycling in mobility - Plastic: Too versatile to throw away 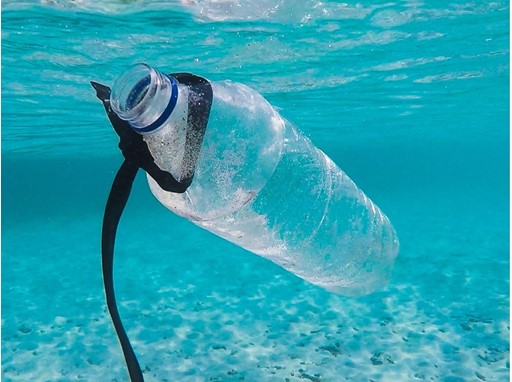 Shocking news about the littering of the world’s oceans shows that the disposal of plastic is one of the biggest environmental problems of our time. Less than a third of plastic waste in Europe is recycled, and most plastic is sent to landfill or incinerated. There are many possible applications for recycling plastics. We present three innovative examples that combine recycling with mobility.
Globally, around 320 million tonnes of plastic are produced annually. In the EU, packaging material accounts for the largest share of this at around 40 per cent. The service life of products made of plastic varies, but packaging material is quickly thrown away. Even in Germany, less than half of the plastic produced or used is recycled. The rest is thermally recycled, i.e. incinerated, or ends up in landfill.
The automotive industry is still lagging behind in the field of recycled plastics. It is true that more and more plastic is being used in new cars because the lighter design saves fuel and thus reduces emissions. However, most plastic parts are produced from scratch for this purpose. In the BMW i3, about 25 per cent of the plastic used in the car is recycled, i.e. recovered old plastic, says Steffen Aumann, Head of Recycling at the BMW Group. Almost 50 kilograms of recycled plastic is used to build the new Mercedes S-Class.
Cycle paths for the future
A project in the Netherlands shows that there are suitable alternatives available to incineration or landfill. Two cycle paths made of recycled plastic were opened there in 2018. Equipped with numerous sensors, the 30 metre long sections in Zwolle and Giethoorn will serve as a pilot project. The company behind it is called PlasticRoad and is supported by a collaboration of the companies KWS, Wavin and Total. An equivalent of 436,000 plastic cups of recycled plastic was used to build the cycle paths.
The road itself is a modular system that is aimed at being quick and easy to lay. The individual road blocks are hollow, which makes it possible to insert pipes and cables or have them serve as temporary water reservoirs during heavy rain to prevent flooding.
New bicycles from old bottles
Bicycles themselves also offer great potential for recycling old plastics. The Brazilian manufacturer Muzzi Cycles manufactures the frames of its bicycles from plastic obtained from old PET bottles. Juan Muzzi, the company’s founder, had recycled bicycles in mind early on, as he stated an interview with Plastics Magazine: ‘I worked on a polyamide bicycle frame in the early 2000s. Over time I became aware of the environmental problems caused by plastic. I therefore decided to make the frame out of recycled plastic’.
According to its own statement, the Brazilian company produces 132,000 bicycle frames annually. The previously used plastic that serves as the starting product is shredded into small pieces for this purpose. These are further reduced in size and supplied with chemical additives to give the frame more strength and protect it from weathering. In the injection moulding process, the frame is manufactured within four minutes and after five hours of cooling, it can be further processed into a bicycle.
Recycling in exchange for a ticket
Plastic bottles can also be collected in other ways and reused. In the Turkish capital of Istanbul and in Surabaya, Indonesia’s second largest city, deposit systems for local transport were introduced last year.
In Istanbul you can load credit onto your underground card by depositing plastic bottles and aluminium cans. For this purpose, special deposit machines were installed at the stations where the empties deposited are counted and transferred to the ticket in the form of credit. Depending on their size, bottles are worth between two and nine kuruş, and aluminium cans nine kuruş. A ticket costs 2.60 lira, meaning you can pay for a complete trip with 29 empty cans or 1.5-litre bottles.
In Surabaya, a similar system was developed for bus transport. The Indonesian city produces about 400 tonnes of plastic waste every day. According to Irvan Wahyu Drajad, head of the local transport authority, Indonesia is one of the largest producers of plastic waste in the world. ‘With this initiative, we hope to sensitise the public to the effect of plastic on the environment’, he told Deutsche Welle. To be permitted to travel two hours by bus in Surabaya, either ten used plastic cups or, depending on the size, up to five plastic bottles must be handed in at the bus stop or on the bus itself.
Mobility & Logistics
Discover Messe Frankfurt’s international portfolio of events for the automotive, transport and logistics industries. Approx. 25,000 exhibitors and 830,000 visitors are already taking advantage of more than 50 trade fairs, conferences and other events offered by Messe Frankfurt. You will find dates, pictures and insights for these events here.