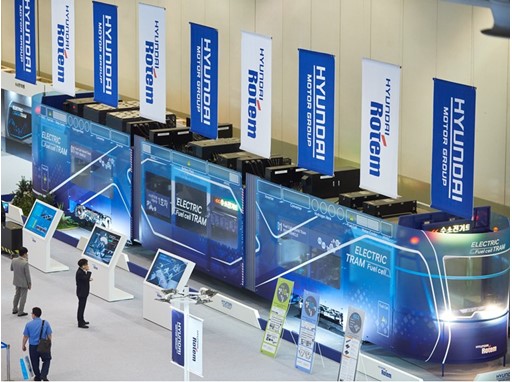 True innovations and top-tier products ensured an upbeat atmosphere
Exhibitors and buyers were delighted with the networking opportunities at the Networking Reception and the many other event programmes
From 12 – 15 June 2019, the ninth edition of RaiLog Korea succeeded in attracting 20,106 visitors (2017: 18,470) and 165 exhibitors (2017: 163) from 23 countries and regions, establishing the fair as one of the most successful platforms for the railway industry.

Amongst the leading domestic rolling stock manufacturers, Hyundai Rotem welcomed a lot of visitors to its booth, by exhibiting a test vehicle of an electric fuel cell tram adopting hydrogen fuel cell technology. The company also displayed a next generation bogie system of power distributed type for high-speed train EMU-250/300, as well as the low-floor electric train, SNCFT EMU, which is scheduled to be delivered to the Tunisian Railway Authority.
Dawonsys also attracted the industry’s attention, by introducing an EMU car of the Seoul Metro Extension Line #7 at the fair, together with inverter boxes, an auxiliary power supply (SIV) unit, Train Control and Monitoring Systems (TCMS), HVAC for passenger coaches, double converters and air purification systems.
Participants optimistic about 2019 edition
Exhibitors' positive feedback has affirmed RailLog Korea is a successful platform for both business and networking opportunities.
Robert Kollouch, Head of Railway Engineering of  AUSTROROLL® - Wieland Austria GmbH, who joined the Austria National Pavilion, was happy with the fair as a whole: “We were very satisfied with the trade fair. We talked to many decision-makers and welcomed numerous interested trade visitors to our stand. In fact, we met significantly more potential customers during this year’s event than we did in 2015 or 2017. Now it’s time to start the ball rolling with the projects we discussed.”
Among those describing RailLog Korea as the leading platform for the developing Korean railway transit market was XIE Fei, Marketing Manager of CRRC Zhuzhou Electric Co Ltd: “Firstly, through RailLog Korea 2019, we have set up our connection with the major Korea rolling stock manufacturers, railway operators and CRRC Zhuzhou Electric. Secondly, by comparing the traction motors of other exhibitors with our own, we found that our PM traction motors have greater advantages in terms of performance parameters, like weight, power density, reliability and so on. We have reason to believe that together with the most competitive products, we can satisfy the demands of Korea markets.”
Achim Klett, CEO of Binder Connector South East Asia LLP, was also highly satisfied with the show: “Our feedback regarding the RailLog Korea 2019 is definitely positive. It is a well-organised exhibition, and the number and quality of contacts we established is definitely good, even though the final results can only be evaluated later on.”
Julien Alves, Contract and Project Manager of JST Transformateurs, praised the good management of the fair: “RailLog Korea is a rather small exhibition, but it is a really interesting venue to explore the Korean market. We had big meetings with important people, customers as well as end-users at our booth.”
Sophia Hsu, Sales representative of Minmax Technology Co., Ltd. noted: “This was our first time to join RailLog Korea. It is a good chance to understand the railway market and to do market research. We hope to target more customers after the exhibition.”
Meanwhile, many global trade visitors and buyers attended the fair to extend their supplier network in Korea. Matthias Buehler, Strategic Purchasing Manager International Procurement Office Asia, Deutsche Bahn AG, stated: “In my opinion, RailLog Korea is one of the Asian trade fairs that’s always worth a visit. That‘s why it is a fixed date in our calendar. We‘ve had some excellent appointments and conversations during the fair, and a very informative tour in the plant of Hyundai Rotem.”
Exhibitors and buyers were delighted with the networking opportunities at the Networking Reception and many other events
RailLog Korea 2019 presented a comprehensive range of event programmes, which provided exhibitors and visitors with in-depth insight regarding industrial topics.
Among the events attracting a lot of audience, were the “Railcar Company Purchasing Plan & Process” by Hyundai Rotem, the “East Asia Railroad Network - Talk Concert” by RailHope, the “Railway Type Approval System and Standard Specifications” and the “9th KRRI-RTRI Technical Information Exchange for Railway Standard” by KRRI. The “RailLog Korea 2019 Job Fair,” sponsored by KORAIL, KR, Humetro and Hyundai Rotem, had a constant stream of visitors looking for railway-related jobs.
Overseas organisations were also active in holding seminars during the fair. The Indonesian Ministry of Transport organised “Market Sounding for Indonesian Railway PPP projects ˮ and MRT Jakarta hosted “Corporate Investment Opportunities in Jakarta Mass Rapid Transitˮ.
For the first time, the “Networking Receptionˮ was held on the opening day, inviting international and domestic exhibitors and buyers alike. In a casual atmosphere with finger foods and craft beer, performances and a giveaway lottery were offered to all invitees, enhancing global networking opportunities via RailLog Korea.
Among those joining the Networking Reception was Dirk Lukat, CEO of Schenker Korea Ltd. He was pleased with the event: “This was an excellent opportunity to network and understand more about the industry.”
The next RailLog Korea will be the 10th edition and is scheduled to take place in June 2021 in Busan, South Korea.
For further information about the fair and to download photos, please visit the official website: www.raillogkorea.com/en.