Jump in! A new car festival The Festival of Motoring Sochi was presented in Moscow 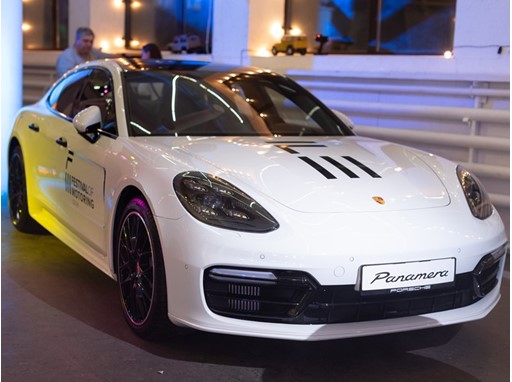 On December 5, 2018, the presentation of the Festival of Motoring took place in Moscow. The interactive festival will be held in Olympic Park and on Autodrome Sochi on July 18–21, 2019.
The organizers of the Festival of Motoring Sochi are the exhibition company Messe Frankfurt Rus and the Association of European Businesses, with the support of a number of major car manufacturers and the government of Krasnodar Region.
During the evening, guests were able to immerse themselves in the Festival of Motoring Sochi experience, including discovering the main thematic areas of the Festival, talking with representatives of major auto producers, trying out virtual reality racing and winning prizes from organizers.
Michael Johannes, Vice President Mobility and Logistics Messe Frankfurt Exhibition GmbH, said that the idea to hold a car event for the whole family appeared in 2015 at a car show in Johannesburg (SA), when the car manufacturers called for changing the format of the exhibition to involve a larger number of visitors. The first Festival of Motoring was held in South Africa in 2016 and received more than 50,000 visitors. The festival has done so well that the decision was made to hold it in other countries. The next destination will be Sochi, which will host the guests from all over the world in summer 2019.
One of the speakers at the event was William Morrison, Director of International Projects and representative of the Festival of Speed, the most famous automotive event in Europe, which is held each year in Goodwood. He shared his many years of experience in organizing the Festival of Speed, which has been held for 25 years in the grounds of a country manor, Goodwood House, located in West Sussex, United Kingdom.
“The Festival of Motoring Sochi is not only an entertaining sporting event, but it is also a tool for improving the business climate and forging close ties between international auto producers and Russian consumers,” said Frank Schauff, CEO of the Association of European Businesses, the main representative body of foreign investors in Russia.
“Despite the Russian car market showing stable growth over the last year, the upcoming tax changes could significantly affect sales. That is why it is so important for auto producers to find a new, interactive format in which to present their cars in order to draw more attention and interest from consumers," said Frank Schauff.
Many members of the AEB Automobile Manufacturers Committee, the largest industrial committee of the Association, are seriously interested in the festival. Among them is Stefan Teuchert, CEO of BMW Group Russia, who gave a presentation and expressed his support for the Festival of Motoring. His colleagues Thomas Staerzel, CEO of Porsche Russia, and Jan Madeja, CEO of Mercedes-Benz Russia, highly appreciated and supported the idea of the Festival of Motoring Sochi.
In conclusion, CEO of Messe Frankfurt Rus Eugen Alles spoke in details what can the visitors expect at the Festival in Sochi.
«We are preparing several thematic areas where visitors can have a truly unique experience and get acquainted with car brands as closely as possible. The festival space will be divided into 3 main areas:
The Festival of Motoring Sochi promises to be interesting not only for professional drivers and racers but for all lovers of driving and speed who find themselves in Sochi next summer.
More information about the launch event and the statements from car manufacturers on www.festivalofmotoringsochi.com