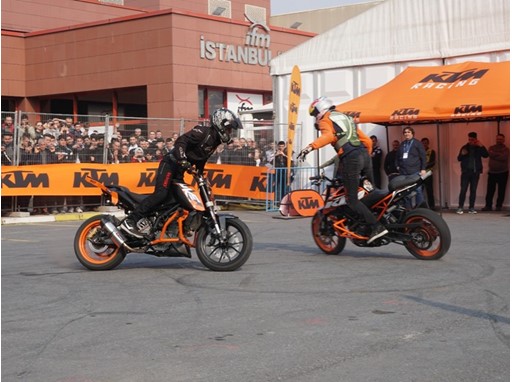 The most comprehensive event of the motorcycle and bicycle industry in the region, Motobike Istanbul, which is organized by Messe Frankfurt Istanbul, sponsored by Motul with the support of the industry-leading associations MOTED, Motoder and Bised has ended. The exhibition, which the motorcyle and bicycle lovers have been eagerly waiting for, was opened by Messe Frankfurt Istanbul General Manager Tayfun Yardım, Sakarya Deputy Kenan Sofuoğlu, Motorcycle Industry Association President Bülent Kılıçer, Motul Turkey Sales Manager Kerem Oyılmaz and Aytemiz General Manager Ahmet Eke.
New models attracted attention during the launchings at the exhibition
This year, Motobike Istanbul took place with the participation of 255 brands from 24 countries spread over a 14,227 m2 stand area. New model launchings attracted attention at the exhibition which was visited by 99,231 people. Motorcyle enthusiasts had the opportunity to look closely at the new models from many prestigious brands such as Aprilla, BMW, Ducati, Honda, Harley Davidson, Triumph, Yamaha, Vespa, KTM, Kral, Kuba, CF Moto, Volta, SYM, Bajaj, Polaris, Citycoco, Moto Gusto, Moto Guzzi, Husqvarna, Yuki and more.
Visitors liked the events and show programs
Just like every year, seminars and show programs attracted great attention of Motobike Istanbul visitors. Birkan Polat and Onur Duva, who demonstrated breathtaking motorcyle acrobatics shows, excited the motorcycle enthusiasts throughout the expo. Safe driving training given by experts, advices regarding winter routes and motovlogger interviews held within the scope of "Motobike Academy" were appreciated by the visitors. While the main sponsor of Motobike Istanbul 2019 was MOTUL, the leading brand of mineral oil, other sponsors, Garanti Bankası, Aytemiz, Quick Sigorta and Super FM shared the excitement of motorcyle and bicycle enthusiasts for four days by partnering.
The dates for 12th Motobike Istanbul are announced
Motobike Istanbul, which will be held for the 12th time in 2020, will be the meeting point of motorcyle and bicycle enthusiasts between 20th and 23rd February. The details can be followed on the official website of Motobike Istanbul, Facebook and Instagram accounts.
For more information: www.motobikeistanbul.com.tr
Supported by
BİSED – Bicycle Industry Association
MOTED – Motorcycle Industry Association
MOTODER –Motorcycle Industrialists Association
Motobike Istanbul is held with the support of Turkish Ministry of Commerce and KOSGEB.
About Messe Frankfurt
Messe Frankfurt is one of the world's leading fair organizer companies with 2,500* employees all over the world and annual turnover of 715* million Euros. Messe Frankfurt has 30 subsidiaries operating in more than 175 countries. Today, Messe Frankfurt organizes exhibitions in more than 40 cities around the world. Messe Frankfurt is a public company with a 60 percent stake in Frankfurt Municipality and 40 percent in the state of Hessen.
For more information, please visit www.messefrankfurt.com.
* 2018 figures